CEO, Dakota Meyer, built DM Tactical on the principles of honor and integrity.

In the heat of battle, Dakota’s defining characteristics shined through, and he applies the same values he exemplified on the battlefield to the board room. DM Tactical is committed to solving our client’s biggest challenges in a value-added, timely, and cost effective manner.

Contact us today to see how you can become a member of our team.

Who is Dakota Meyer?

Born and raised in Columbia, Dakota enlisted in the United States Marine Corps in 2006 after graduating from Green County High School. He completed his basic training at Parris Island Recruit Training Depot later that year.

Scout / Sniper school trained and a highly skilled Marine infantryman, Dakota deployed twice to combat duty; in 2007, to Iraq for Operation Iraqi Freedom; and in 2009-10 he deployed to Afghanistan for Operation Enduring Freedom.

In September 2011, President Obama awarded Dakota the Congressional Medal of Honor — the highest military decoration awarded by the United States government — in recognition of his acts of extraordinary valor on Sept. 8, 2009.

Over the course of a six-hour firefight, without regard for his own personal safety, Dakota repeatedly braved enemy fire in eastern Afghanistan to find and save fellow members of his embedded training team. Wounded by shrapnel, Dakota entered the kill zone four times to evacuate approx. 13 Marines and soldiers and approx. 23 Afghan soldiers. On his fifth trip in, Dakota recovered the bodies of three missing Marines and a Navy corpsman killed in the battle: 1st Lt. Michael Johnson, Staff Sgt. Aaron Kenefick, Hospital Corpsman Third Class James R. Layton and Gunnery Sgt. Edwin Wayne Johnson Jr. following the battle.

Dakota Meyer is the third living recipient of the Medal of Honor since the Vietnam War, and the first living United States Marine in 41 years to be so honored. Dakota completed his active duty in 2010 and now serves in the Individual Ready Reserve of the U.S. Marine Corps Reserve. In addition to DM Tactical LLC, Dakota owns Dakota Meyer Enterprises Inc. a construction company to provide yet another opportunity for a workplace for his fellow veterans. 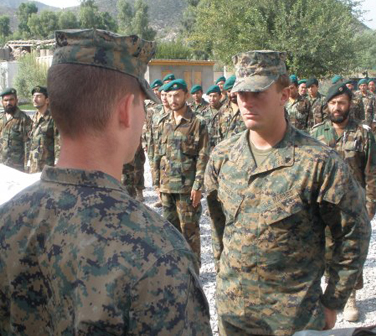